“A meeting will be called this afternoon at 5 o’clock in the Sun Parlor of the Hotel Plant for the purpose of organizing a chapter of the Daughters of the American Revolution in this city.  All in Plant City and vicinity who are eligible to become a member are most cordially invited to be present.  On February 22nd, in the Sun Parlor of the Hotel Plant, occurred the pre-organization meeting of the DAR chapter of Plant City. The organization leader, Mrs. Mary Nel Moody, in speaking of the selection of the birthday of George Washington for the first meeting of those interested in a DAR chapter in Plant City, paid a tribute to the Father of our Country as being one ordained by God to make America a nation and his aim to unite all who love America a nation and of his aim to unite all who love America in defense of her liberty and then bind them together in a more perfect and lasting union.” 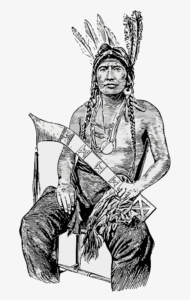 Depiction of area Native American. Echebucsassa is considered the first name of Plant City and is thought to be the name designated by the Seminole Indians who used the area as a camping ground while traveling to and from Fort Brook in Tampa for trading.

The name “Echebucassa” was unanimously adopted for this chapter, this being the Indian name for this section, meaning, “Where the moon puts the colors of the rainbow into the earth and the sun draws out in the flowers.”

“Mrs. M.N. Moody entertained the members of the Echebucsassa Chapter of the Daughters of the American Revolution at her home on North Collins Street Saturday afternoon.  Mrs. George Wilder gave interesting descriptions of the Continental and Constitution Halls which are located in Washington are owned by the DAR. Mrs. Carl Hoffman read a poem written by Dolly Madison, “A Tribute to Lafayette.”

The first work to be undertaken by the local chapter will be the observance of Flag Day, June 12th, in which other patriotic organizations are invited to take part.”

“The incoming officers were installed by Mrs. Mary Noel Moody, who at this time presented to the Chapter a badge to be worn by each incoming regent.”